“For thus says the Lord GOD: Behold, I, I myself will search for my sheep and will seek them out.12 As a shepherd seeks out his flock when he is among his sheep that have been scattered, so will I seek out my sheep, and I will rescue them from all places where they have been scattered on a day of clouds and thick darkness.” 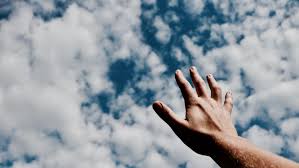 The seeker aimlessly wanders the broken road chasing the things of this world in an attempt to fill a God-shaped hole. The chase is lonely and unfulfilling. At every stop, the wanderer succumbs to the traps devilishly placed to distract him further from the truth.

He cries out, “How can I be fulfilled?” Confusion sets in like a dark cloud with the goal to suffocate any chance of light. Desperation replaces hope. The dark voices multiply and spew words of failure. The seeker can no longer hear the cloud of witnesses offering encouragement as his eyes have been long removed from the cross.

He says, “This journey is entirely too hard.” So, he takes the first step off the path, and he sits. In his vulnerability, the dark powers encroach upon his space in the last efforts to destroy. Yet, in the deepest of spiritual valleys, a burst of light scatters the darkness. For while the seeker was resting, he offered a simple prayer acknowledging his wayward ways; he made a choice to no longer chase the things of this world; instead, his Spirit reached to the Father who was chasing him the entire time.

The embrace between the Father and His child was blinding. All evil was repelled. The Father’s wing enveloped His child which offered security and rest. The seeker was transformed into the select!

I am beyond encouraged by this passage in Ezekiel! Not only does our Savior seek us out, but He RESCUES us when we’ve been scattered by the dark forces! YES! I can truly picture this in my head…God the Father reaching down in a mighty force to rescue the scattered. His mighty right hand is strong, precise, yet tender.

I pray dear friends that you stop chasing the things of this world! This includes chasing people – anything you place before God is an idol. We must be powerful witnesses to His Kingdom. Is it time for a personal purge? What are you chasing or even holding on to that is preventing the Spirit from working fully in your life? God is a rescuer – allow it!